We’re supposed to be best friends, y’all, but no one told me how hard the transition to kindergarten could be.

Last year, my daughter waltzed into it with ease. Sure, we had some tears and tired tantrums from the exhaustion of the early morning schedule, but by and large, she took to it just fine. We only ever heard good things from her teacher, she did and said all the right things, and was like a mini Mary Poppins — practically perfect in every way.

This year, my son, however, is having a rough time. I’m talking “teething baby wakes you up for the day at 4 am and you’re out of coffee and your car’s in the shop and the dog ate your debit card so you can’t even go buy coffee” rough.

On day two, I got a call that he got kicked in the face by accident because he crawled into his friend’s bathroom stall once he was done with his own business. On day three his teacher called, asking me to help remind him at home to keep his hands to himself while she worked with him at school. And on day four, because of some poor behavior and disobedience, I got called into the principal’s office.

In my entire elementary school career, I never even saw my principal’s office. Let alone in kindergarten. On the fourth day of the school year.

Rough, I tell you.

So, yeah — the transition was hard on all of us and there were many moments when I felt like the world’s worst mom because he’s my spawn and I created him so therefore everything is all my fault.

One night, though, I was reading to my kids the books they picked out for bedtime stories and by a serendipitous stroke of luck it was about a little boy learning to be thankful. I know gratitude is all the rage these days, and this is so cliché with Thanksgiving coming up, but it really helped this tired mom.

Rough as the transition was, the situation could’ve been a lot worse.

Not being one to miss a teachable moment, I stole another idea from the same book — Being Thankful by Mercer Mayer — and had my children each create a “thankful rock.” They each picked out a rock from around our apartment complex and got to coloring and painting. While they got their craft on, we talked about not only what we’re thankful for, but why gratitude is so important.

I’m grateful that because of where we live, I’m able to take my kids on adventures even though I’m unable to drive. Because my husband got a job out in Beaverton, I get to live mere feet away from one of my best friends. We have a roof over our heads, an obscene amount of fruit snacks in our pantry, and a bathroom with running water that is clean when company is coming over.

My daughter said she was thankful for her friends at school and all of her art supplies. I heard that as, “I’m thankful for other people that love me as much as I love them and the ability and instruments to create.” My son, my sweet boy having a rough time, said he was thankful for a playground to play on and that he finally got to be in kindergarten. Despite the difficult time he and I were having, he still was so excited and joyful as he looked toward the adventures that lay ahead of him. I took a cue from him and chose to trust him and I am so happy to report that things have gotten much, much better for all of us.

That’s not to say things have been perfect. We were still getting calls from the assistant principal well into October. But life isn’t about being perfect — it’s about progress. I’m thankful I can confidently say he’s making progress in school and I’m making progress in communicating with him. And in a few weeks we’ll both be making progress on some turkey and pumpkin pie. Happy holidays everyone.

Toni Hammer and her family live in Beaverton. She spends her free time avoiding deadlines, drinking too much coffee, and wondering why she can’t sleep at night. 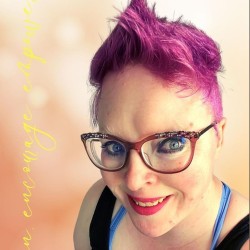 Toni Hammer
Toni Hammer helps boss moms get over their fears and doubts so they can boldly share their stories on social media and attract their dream clients. You can find out more at tonihammer.com.﻿