Skateboarding with Kids in Portland

Your child wants to learn skateboard, but where do you start? Luckily you live in Portland, Oregon! Portland was named “Skateboard Capital of the World” in 2009 and has a large and friendly skate scene. I’ve been skateboarding for twenty years, the last five in Portland, and these are my favorite local resources for parents with kids who are new to skateboarding.

Portland Parks and Rec
Portland Parks and Rec has a robust skateboarding program every summer available at several locations throughout the city. The rest of the year it offers smaller programs at local community centers. These classes are geared towards beginners and many of them take place only on flat ground, teaching kids how to stand on the board, balance, push, turn, and ollie (a technical move where you jump with the skateboard on flat ground).

Skate Like a Girl
Skate Like a Girl has several co-ed and girls summer camp options at different skateparks around Portland. It is a not-for-profit organization making skateboarding accessible to more people than it has traditionally been available to. One thing that makes its camps really fantastic is that they provide all the gear needed if you don’t have gear. It’s a great chance for kids to dip their toes into skateboarding without the upfront investment in gear. It also offers monthly clinics for girls and women of all ability levels at Commonwealth Skateboarding, gear is also provided at the clinics. Most or the programs are available on a sliding scale.

Windell’s Camp
Out on the edge of the Mount Hood National Forest lies a world class ski, snowboarding, skateboarding, and BMX camp. It boasts one of the biggest and most unique outdoor skateparks in the Pacific Northwest, as well as a sizable indoor park. During the summer, it offers a great camp for kids who take skateboarding seriously and are ready to progress from the basics to more advanced tricks. During the off-season, Windell’s has open skate times open to all, which is great for all ability levels.

Commonwealth Skateboarding
Commonwealth Skateboarding is home to the only indoor skatepark within Portland city limits. It features a concrete horseshoe bowl, a mini ramp, and a small street section that includes a bank and small ledges and rails. Commonwealth offers a kids-only session on Saturday mornings, private lessons, summer camps, and it also hosts the Skate Like a Girl beginner and intermediate clinics each month. Its skateshop is well stocked with boards and shoes, including kids sizes! It is a great resource for parents looking to get their kids off on the right start. Cal Skate

Cal Skate
Cal Skate is the oldest skateshop in Portland, and one of the few west of the Willamette. It has a massive selection and knowledgeable staff. If your kids are ready for their first (or second, or third) deck, this is a great spot to check out. There is a lot of skate history displayed throughout the shop that also makes Cal Skate well worth your visit.

SMART Collective
If you live a little further out in Southeast, like myself, SMART Collective is a wonderful place to pick up skate gear. Skater owned, its mission is about more than making money. Its mission is to “Empower Youth Through Music and Skateboarding.” The owner and staff are very friendly and are happy to answer any questions you have.

Ed Benedict Skatepark
Also located in Southeast Portland, Ed Benedict Skatepark can be a great spot for beginners, if you avoid the busiest times of day. If you hit this park early you will often have the whole place to yourself. Full of very mellow banked ramps, and small ledges, it’s a great place to practice cruising around a park or try out some more technical street tricks.

Gabriel Skatepark
Across the river in southwest is another park great for beginners just getting comfortable rolling around a skatepark. Gabriel Skatepark features transitioned (curved) ramps of all sizes, but its small ramps and snake run are great for newer skaters. Gabriel rarely gets crowded and probably has the most laid back, friendly scene of any public skatepark in Portland. Its my personal favorite spot.

Happy Valley Skatepark
Just outside of Portland lies the little town of Happy Valley, with a little skatepark to match. Often quiet, this park is almost entirely beginner sized ramps. It’s located in the small community’s amazing city park that also features two playgrounds, and a splash pad to cool off in. When this park gets crowded it’s usually with young children, making it a great spot for your own younger skaters!

AJ Waters, after years of effort and work, opened a new indoor skatepark in Milwaukie called Stronger Skatepark. Stronger Skatepark is safe and clean space for people of all ages and abilities to engage in action sports and the local community.

Sessions at Stronger Skatepark feature a 6 and under morning for parents and youngsters, homeschool hours, bikes only, scooters only and skateboard only times, LGBTQ sessions, 12 and under, 30 and over, and ladies only along with their regular open sessions. 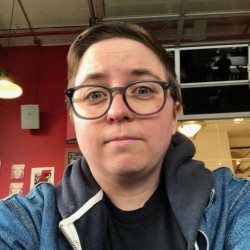 Follow her:
AJ Waters
AJ Waters has been writing on the internet for just about as long as there has been internet. They write about their life experiences, self-directed education, and skateboarding. AJ has 15 years experience working with children and has been riding a skateboard for 20 years. They live in Portland, Oregon with their husband, son and four dogs.

Follow her:
Latest posts by AJ Waters (see all)
Advertisement